Peter of the Wide 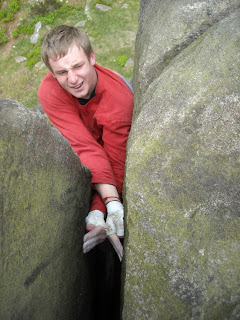 It’s always a bit of a tricky thing trying to start a blog. It’s like you’re starting a new chapter in a book – and when you start, I think it’s always nice to have a bit of an introduction to the people involved in the story. As Pete and I have climbed together for a few years now and have done a huge amount of climbing together we thought it might be an idea to write a little introduction to each other. That way, we can tacitly take the piss out of each other and hopefully the other person won’t notice too much.

Many people know Pete for his general all-round trad climbing – he’s bloody good at it, so no surprises there! However, I think it’s actually his wide crack skills that he should be best known for. He’s repeated or established pretty much every single hard offwidth crack in Europe and as yet, none have withheld his shuffle*. Many good climbers would be happy with ticking Ray’s Roof alone, but when you’ve soloed this as a warm-up, done choss E8 offwidth, repeated Thai Boxing twice in a day and put up beefy test-pieces like Gloves of War…… well, you know you’re cooking!

Loads of people think Pete’s climbed these routes because he has this innate talent for climbing and that’s he’s as strong as an ox. Well, they’re wrong…. (well about one part anyway…) It’s actually his massive bloody-mindedness to never give up on anything and 100% commitment that truly wins through. It’s probably why I’ve enjoyed climbing with him so much over the years as it’s awesome to have someone who’ll get so psyched. It honestly doesn’t matter what it is half of the time. We’ve done deadhanging sessions at the bottom of crags in -10 degress, spent hours trying to climb V0 boulder problems upside-down, created a million variations on Technical Master in the pitch black of night and it’s all been amazing fun!

There is one weakness in Pete though. A true Achilles heel. Just ask him about The Holy Grail Grade Chart and The Walk of Life…. Oh shit, I’ve said it now.

* Shuffle can also be replaced with; Randy Hump/Trout Tickle/Invert Torpedo/Greek Toe
Posted by Wide Boyz at 5:21 am