With a trip down to planned, most people would be thinking of beautiful granite slabs and walls to climb. However the only route that I desperately wanted to do, was the route, which if asked to be climbed, most people would say they’d rather go and stand at the very North end of Sennen on a wavy day and wait for the tide to come in; strange one really! This little number; Super jam, is probably relatively unheard of maybe due to the fact that it is only E5, the fact that you probably never see anybody on it or possibly because there are harder graded routes of this style in the country such as Ray’s Roof and Gobbler’s Roof. (I’d only heard about and seen it when I saw some photos from the BMC international meet).

Being only E5 I couldn’t believe how flared the final section of crack looked. No wonder nobody went up there out of option, it looked horrendous; but that’s what I liked about it and went up optimistic that I could onsight it.

The start is simple, reaching off big undercuts to bomber hand jams. From these I flicked my feet above my head into the flared pod and engaged some stacks, just one shuffle leads you to the lip turn where you somehow have to get your whole body from completely inverted to the correct way up in the space of about a metre. I spent about 10/15minutes on the onsight wondering what to do; right foot in, left foot in, wide ponying, trout tickling, invert torpedo. I actually managed to get the good hold and pull round the corner on it, but my right foot had got into the most ridiculous position it cammed in so hard I couldn’t get it out. I looked back into the crack and actually wondered whether it was still attached to my leg. 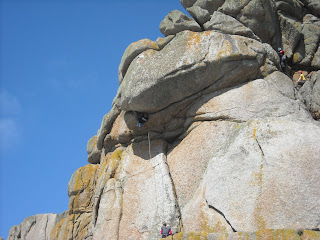 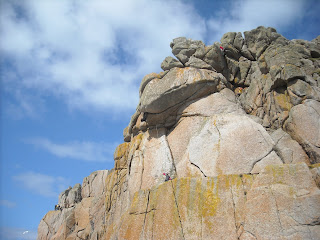 After some more ground up battles, a sore right ankle, 2 tape rolls later and a bored Katy on belay I decided to pull on and check the foot placements. 30 seconds later the sequence was solved. The route was stripped and 30 minutes later lead, to what became a much more enjoyable experience as the sensation of nausea, full body pump and tomato heads is a natural and pleasant feeling for me now. 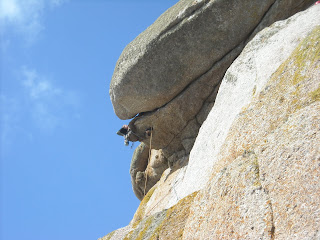 This route emphasized even more then ever to me that grades of offwidths just mean absolutely nothing at all. Most are harsh or sandbags, simply because not many people climb them and the people that do climb them, know its all about the effort that is put in on these puppies that counts. Whether it is VS or E7, you’re usually just more relieved that it’s your second that has to go through what you just did rather then being happy with what you actually climbed! (I had to ab because nobody wanted to follow)

In comparison, I thought that Super Jam was similar in style but harder then Ray’s Roof with a broader array of offwidth skills required.
So, does that mean Jardine’s original grade of E4 for Ray’s was actually correct or Super Jam is a super sandbag?
Or does it mean you should get over to Staffordshire and get the tick before some offwidth gangstas come over from and say it really is 5.11?
It probably just means to never trust the grade and instead trust the width…(whatever that means?!?!?) 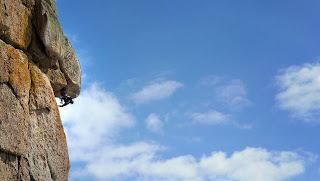 Thanks very much to Pete Saunders for this last photo “Resting on Super Jam". © PETE SAUNDERS