A while back when Pete and I originally soloed Ray's Roof, we wrote a few thoughts on the matter. I'm not sure that I ever did anything with those thoughts, so here they are to enjoy. Looking back at it, I'm not sure who took the piss out of who, more effectively. 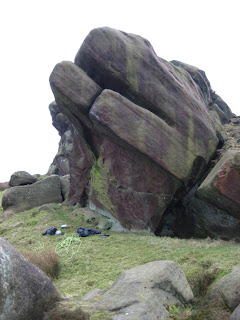 As many people know, the first ascent of Ray's Roof was done by the visiting american, Ray Jardine. A pioneer of hard, burly cracks in the , it was no surprise that he managed to put up a "real fighter" on God's own rock. Much like many of his rarely repeated offwidths, he gave his Baldstones route a fairly modest grade of 5.11c, which comes in around E4. I'm guessing that he never ventured over to Ramshaw to see how Ramshaw Crack (at the same grade, but not difficulty!) compared....

Over the following decades, Ray's Roof saw the odd repeat by local obsessives and crack deviants. However, it wasn't until Dawes, Plant and Woodward decided to have a very public tussle with this roof crack that it really began to build a reputation. These demi-gods were thoroughly shut down and shut out - even the enigmatic Dawes with his 3D (or is that 4D??!) brain couldn't work out an appropriate sequence. Tales of hidden pebbles, gardening glove ascents and missing chockstones only added to the mystery of yet another desperate Jardine test-piece.

It wasn't until myself and Pete Whittaker headed over to the Baldstones to climb Ray's Roof in 2008, that the spell of this route started to break. After working out a more reasonable sequence of moves and passing these on to other local climbers, a number of stylish ascents followed over the next couple of years. Hearing of even the crimp-master personified - Ryan Pasquill - ascend this beauty, we knew it was time to set the next challenge. No ropes, no cams.... just some pads, friends and a load of finger tape.

Pete and I have described each other's ascents, so you can tell what's going on inside the twisted mind of an offwidther. It's not pretty, it's not very complimentary and it's certainly not fair. Enjoy:
Tom
So here we were again, sat underneath Ray's Roof. Our last soloing attempt had been aborted over a year ago after I'd catapulted over Pete's mum's head in an over-eager handjam dyno and the winds had picked up to near hurricane levels.... This time though, it was going to be different; we'd spent countless hours hanging by our feet in offwidths around and picked off most of the hardest that anyone could throw at us. We felt confident.

Pete stepped up to the plate first, mainly because I let him. Mostly with these tough offwidths it's best to let your adversary go first as they'll waste untold amounts of energy working the beta out for you and perfectly lining all the best jams with chalk. Unfortunately, Pete looked really rather at ease on his warm-up attempt and pushed straight on for the leg-jam rest. As he's quite a bit weaker than me, he tends to hang around on his feet considerably more, so my hands rubbed in glee as I watched him slowly look more tired in this position. As with most offwidths, it's a considerable advantage to have small knees and large fists; something Pete is extremely well endowed with. Obviously as this makes most offwidths hugely easier for him, I try to employ ample amounts of tight rope (so he can't move up), bad beta (so he falls off), spit in his chalk (for poor friction) and demoralising shouts (come on Pete, just fall off so we can all go home...). He was too fast for me this time though - my calls of "it's starting to rain" and "I think I've just seen a buzzard nesting in the break" did little to stifle his enthusiastic jams through the crux. Damn, he'd just made the first solo ascent; as a bloody warm-up.
Pete
We were back - taping up at the bottom of Ray’s pondering the best way to start it.
Without the “Staffordshire Reach” it is impossible to reach into the good part of the crack from the good foot and hand holds and so most people who live outside of Staffordshire have to find a different way to get into the crack. Some things just aren’t fair are they?!
As Tom can actually only jam, he couldn’t use my safer crimp beta to get into the crack. As a result he had to take the bolder flake approach on the left, which seeing as though he is getting on a bit, I thought was a fine effort. This approach is fine when leading the route, but when soloing it could probably leave you over at Gib Torr if you got it wrong, as it involves a massive cut loose and swing from a horizontal position with your head actually slightly lower then your feet.
After getting through this section without any of the mishaps of last time, which involved a dismount face first into the grass slope, he crossed the roof section with relative ease. On approaching the lip he realised the offwidth genetics that had been passed on by his mother and father were all wrong and his mini-fists didn’t fit to well, so had to drop off for a re think and more importantly - a re-tape.
After redoing his tape job, which now looked more like a plaster cast, he set off again. On reaching the lip he managed to get a better seated jam, went hunting for dung at the back of the crack and pushed on. After a lot of shuffling, followed by some well executed randy humping, he found himself halfway round the lip with a dodgy knee jam. I gave no sympathy to him here as he does have skinny knees (a useful offwidthing tool) so watched and went for the arms folded, classic “British Spotting Technique” as he struggled to get a knee jam seated properly and grunt up to the top.
With relief and “an emotional experience” he eventually landed himself on the funnel and left the Staffordshire boys standing at the bottom with their chins on the floor!