Off to America! It could be emotional....

Tom and I finally set off to America tomorrow. Having been waiting for so long now, it might not be possible to contain ourselves fully on the journey – I can see us having to whip the size 5s and 6s out in the airport and crack out some upside down sit-ups!

Hopefully we should arrive at Vedauwoo, Wyoming on Wednesday morning. I say “hopefully” though as it’s not fully guaranteed with our amazing sense of direction that we’ll actually get anywhere further than oversized baggage at Heathrow.

For our final blog post before we go away we thought it would be good to see how each person was feeling about the trip. We decided to do this by asking each other some questions – some sensible, others not so! 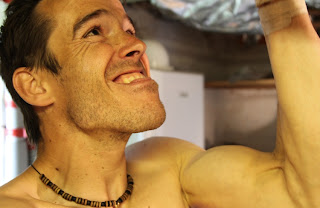 Photo: Tom trying to bite his own face off in preparation for "American Pain."

(Q)PETE: Tom, I've heard and witnessed that you travelled back from Ilkley to Sheffield via Birmingham and that when checking weather forecasts on the internet for Yorkshire you used the postcode for Llanberis. How do you actually expect to find any of the crags you want to climb on whilst out in America?

(A)TOM: It is true that I get lost even trying to find the bathroom in my house, but I have a secret weapon up my sleeve; a MAP! Yup, I've heard (from your Dad) that you're a reliable map reader and boy am I going to be using this resource a lot. I'd say that Alex Ekins might help out, but I know he's absolutely diabolical with directions as well, so we might end up waiting in a US airport until Kim arrives!


PETE: If you make it to the crag, you may realize that we’ve actually climbed very few offwidths on real rock, how do you think the training that we have done will transfer?

TOM: My suspicion is that the training will transfer pretty well on the really steep stuff, but we'll still be pretty rubbish at the vertical stuff. I'd like to say that it's because the American's have so many more vertical offwidths to practice on, but in reality it's the size of their biceps and cowboy boots that really counts....

TOM: I've been told by Kim (my wife) that I have to say it's our daughter coming out to visit, that I'm most looking forward to... I might also add that I'm psyched out of my tree for Belly Full of Bad Berries, The Crack House and more new routing shenanigans with your good self.

The part of the trip I'm most apprehensive about is trying Lucille in Vedauwoo (it's such a hugely significant route) or realising that I've actually booked our flights for the wrong country and we’re off to Yemen. 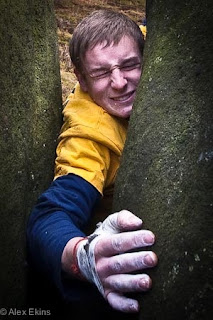 (Q)TOM: So Pete, we've done loads of training and preparation for this trip now. What shall we do if we start falling off all the 5.9s?!

(A) PETE: I'm actually expecting to fall of all the 5.9s, especially in Vedauwoo where its meant to be sandbag city. However whenever you fall off something easy its best to just get on something much harder and steeper and fail on that instead because it will make you feel better and your mates won't think you're as much of a punter. Failing that i'll send you up everything and say i'm still jet lagged from a month ago.


TOM: What do you reckon of all these American offwidth wads?

PETE: America isn't just known for its offwidths, but like you say, the offwidth wads that it breeds. I have spoken to a few of the wads by email and my assessment is...that they are going to be well hardcore and I might get scared and run away!!! From the stories I've read and pictures I've seen these people feel no pain brother.
I also think they will have really slick technique and I may get to witness something really special, which is the illusion they can create when it looks like they slip up offwidths. I'll be psyched to see this as i've only ever seen you stuck in one...


TOM: What part of the trip are you most looking forward to?

PETE: I think 99.9% of people wouldn't look forward to anything we have planned on this trip, (offwidths, crying babies and no sense of direction...hmmmmmm!) However I couldn't be more excited. There are so many parts I am looking forward to...getting to climb a load of different offwidths; meeting new people; coming away from Vedauwoo with some skin and alive; climbing new routes; getting jet lag (never had it, want to see what all the fuss is about); getting to watch you and others feel pain; Kim, Laura and Hannah coming, man the list is endless.
But really there is one part and route that stands out...I think you know what that is. Should be a good adventure!! 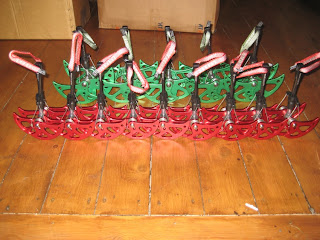 Photo: Wild Country come up with the goods. Thanks guys - you're legends! 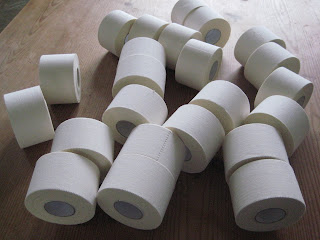