Filming the Wide and Wonderful - Part 1

The last week and a bit has been an interesting time for me and Pete - both mentally and physically! We've been out with Hotaches filming for our US/UK wide obsession, and also a project code-named "Crack School" and............ also a Wild Country promo. Phew, it's been quite a busy time! Whilst we've learnt lots about presenting to camera (that's a major skill I do NOT have), it's been the journey re-visiting many of the UK classics that's been the real eye opener. So much training has been done and so much has been put on the line, but would all the old classics feel hard any more?

The first day started off with a bit of crack school stuff at Millstone doing some easy cracks, but the real meat of the day revolved around Right Eliminate at Curbar. Katherine Schirrmacher was out with us to either be "set up by Richie Patterson" or "learn some wide technique from Tom."

Katherine got really stuck in the with the task and put in a bloody good fighting effort. She used all the usual techniques to start with (swearing, sliding, thrutching) but soon resorted to some good old armbars, footlocks and chicken wings. It certainly didn't all quite end as plannned though........ but maybe you'll see that in footage....?

To be fair to Katherine, we didn't allow her to use any face holds and she could only employ classic offwidth technique to maintain upward progress. To add to this, the chockstone was missing making the crux much harder - and that's before excluding face holds! Certainly a good effort by her on a much harder route that its supposed E3. She'll probably never want to climb another offwidth again, but I think she's got the aptitude - she likes trying hard, is tough, and knows cracks ain't always fun.

The second day started with a solo of Ray's Roof - good effort again Pete for doing this as the warm-up. I pitched off from the final knee lock over the roof and landed on Pete on my effort, which rewarded me with a sore ankle and some skin loss. Pete then had a go with a 20kg weight vest on lead....... and nearly did it! Man, that was a fine effort as he weighed nearly the same as John Dunne with that vest on. US "Wad-Beast" Brian Kim had a go, so did Katy Whittaker and also Sheffield's best looking man, Ned Freehaly. You'll have to ask them how they did though! 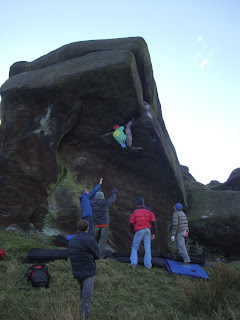 The day was finished off getting some footage on Melvin Bragg, a V8 offwidth boulder problem that I did a couple of years ago on top of Ramshaw. With retrospect I think I might have overgraded that one, as it seems pretty ok these days. Maybe I'm just getting better though?

Gobbler's Roof, E7 6c was the plan for the third day of climbing and we were lucky enough to have "Rocketman" Rob Smith along with us for the fun. Unfortunately conditions were absolutely terrible (although, that's not saying much in that cave!) and Rob couldn't quite get the third ascent we'd privately hoped for. He made a solid effort though and I think it's just a matter of time now for him. I'm proper psyched for you Rob!

Pete and I went back on the route as well, to get some footage of some upside down madness. Paul Diffley had made an incredible job of lighting up the whole cave, so it's was a really unique opportunity to get on the route without the usual gloom. The training has definitely paid off, as the roof section felt very comfortable and only the lip turn still seemed tricky - and still not one to fall off. As Rob nearly proved on one attempt.... 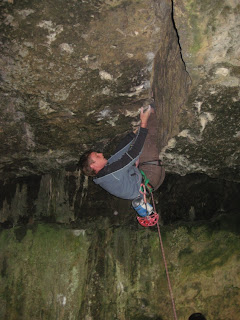 I'll split this blog post into 2 parts I'm afraid, as I'm nearly falling asleep with 8 days of constant thrutching, but to whet your appetite, there'll be: