It's only a week away until we start with the UK part of our film project and Wild Country have very kindly come up with some new goodies - the new Helium friends! 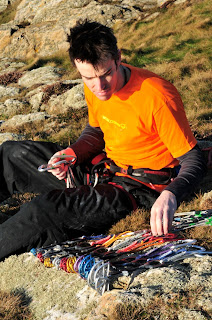 I was lucky enough to get a bit of sneak preview of the new friends at the beginning of the year when I headed over to Wales with Richie Patterson and Ian Parnell. Unfortunately on the day I wasn't able to spend that much time playing around with the gear as it was bloody freezing and Richie was encouraging me to speed up from my usual "snail pace!"

This week however, me and the gear could get cosy and I managed to have a proper look at the business end. There's a massive list on the Wild Country website of all of the changes that have been made to these devices, but it's really a few things that stand out for me as the end user - trad climber. 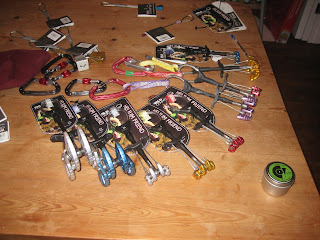 1. The stem is way longer - much easier to get out of deep cracks and more play in the stem on flared grit breaks

2. Soooooooooooooooo much lighter! Not really noticable on 1 friend, but take a whole rack and you're talking.

3. New thumb loop. Much that Richie P would have killed me for saying it, I always liked the Black Diamond plasticated thumb loops and I think Wild Country have made a great choice in using this with their new pieces.Comfortable, and practical.

4. I've not seen this quoted anywhere, but in my opinion the cams are a lot better in their "stickiness/adherence" to the rock. It could be something about the way they're coated in anodising, but it's really good.

Anyway, it'll be time to get them seriously dirty in some wide cracks over the coming 2 weeks. Nine days of filming and a lot of wideness to be enjoyed - I think we're climbing practically every hard wide crack in the UK in the space of a week so better eat my Shreddies!
Posted by Wide Boyz at 3:01 pm