Fuck the pain, one more lap 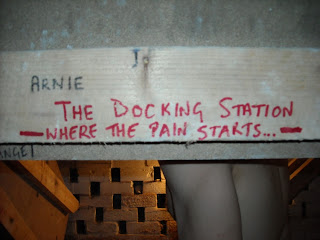 Photo: Just another day in the office

I remember being sat down in Kalymnos a couple of years back with mine and Pete's family thinking - What would Dave Binney do? After all, Dave had been a strong influence in both of our climbing approaches; Pete through his younger years in the GB Juniors and mine as a coach for the GB Team. So, what would we do....? The resounding answer was to build a cellar like no other; no crimps, no pinches, no 45 board and no campus board. Instead I strapped to the underside of my house two different sizes of offwidth roof crack, a massive long 35ft hand crack, a 45 degree double fist offwidth and a knee-bar sit up machine.

With this strange DIY task completed, we then set about getting psyched. Very psyched indeed. I've had sessions down there where after dropping from the multiple laps I could no longer walk properly, my legs and stomach were filled with so much lactic acid. I've seen Pete turn into a mushy mess where he's hardly managing to talk any more and his back has turned a colour so red that you'd have thought he would pass out from blood loss to the brain. We've broken ourselves down in that cellar and we've been happy to do it, because if you want to make a difference, it's gonna hurt. 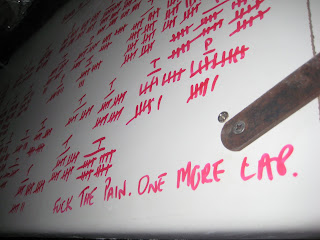 Photo: The Board of Truth

So where has all this taken us? I think (and I'm starting to believe it now) it's achieved for us that new level that we'd previously hoped for - the Binney Dream of athletic development through focused training. Where previously we'd been happy to do laps on the equivalent of 8a's down the cellar, we can now do them with huge weights vests or with 6c cruxes thrown in every 5 moves to increase the intensity of a 100 move circuit. It's still scary though, to wonder what it'll all be like when we go over to the States and actually do some of this stuff that we've dreamed of for so long.

This weekend we headed out to Harborough Rocks with Rocketman Rob Smith to do some mileage on probably the UK's hardest offwidth, Gobbler's Roof (E7 6c). It's a filthy, dirty and dark offwidth roof crack that's probably about 8a to climb if you had to give it a sport grade and is whole new level above stuff like Ray's and Giggling. Fortunately (given how much effort we've ploughed into the training) the route feels very reasonable now and it was great to feel the gains on some real rock and not just 2 pieces of kitchen sideboard bolted 7 inches apart! 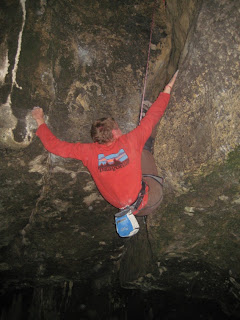 Photo: Pete doing some eliminates on the crux lip turn of Gobbler's Roof

It was also great to see Rocketman on this route as well - in fact it was just good to go out climbing with him as he's so motivated! It's pretty rare that you meet other people out there that are so versatile with their styles of climbing and good at it too. I think when we go back for some filming with the Hotaches crew in a couple of weeks he'll definitely get the 3rd ascent of this filth-fest. Go on Rob!
Posted by Wide Boyz at 3:30 am